Prog rock came to Tanglewood last Friday evening, at least in spirit — and ear-splitting volume. Hard as you may have tried, you haven’t forgotten progressive rock, have you? Just in case, here’s the first article in a splendid five-part series on prog by David Weigel in Slate. Oh yeah: Genesis. Yes. Pink Floyd’s “The Dark Side of the Moon.” Emerson, Lake & Palmer blaring and bashing their way through “Pictures at an Exhibition.” Keyboards galore, huge drum sets, big hair, big sounds, very big ideas — too big for the musical abilities of most of the groups. But it was part of the fun to pretend that it was all so profound. Now, for those who still find it profound, I suggest you get more fresh air.

Such as a trip to Tanglewood, summer home of the Boston Symphony Orchestra. Heck, if you had been there last Friday evening, you’d have felt right at home. For on stage, in addition to all the normal orchestra instruments and conductor’s podium, was a ginormous monstrosity that would have made Keith Emerson do handstands: The International Touring Organ, designed and built by the Needham, Mass. firm of Marshall & Ogeltree. 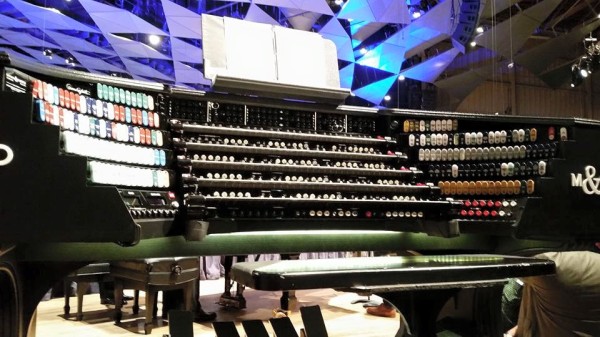 Holy s***, what a cool thing! That’s my intermission-time phone pic of the console above. What else has it got? Oh, just “a supercomputer/amplifier unit in two road cases, with one spare; and a proprietary audio system consisting of specialized speakers mounted in ten wheeled road cases and eight wheeled specialty subwoofers,” to quote the specs on Cameron Carpenter’s website.

Carptenter, for those not in the know, is the 34-year old American organist who has taken mondo organo by storm with his virtuosity, originality and flamboyance. And for once, what happens in organ world has not stayed in organ world, one of the tiny, mostly isolated planets of the classical solar system that I blogged about in my radio days. Not since Virgil Fox played Bach at the Fillmore East has an organist communed with the common music-loving folk as effectively as Carpenter.

Well, the ostensible purpose of Carpenter’s guest spot with the BSO (led by charming guest conductor Stéphane Denève) was to take the solos in two great French works: Francis Poulenc’s Concerto in G Minor for Organ, Strings and Timpani (which followed without pause the concert’s opening work, Samuel Barber’s Adagio for Strings), and the Symphony No. 3 (aka “Organ Symphony”) by  Camille Saint-Saëns (final “s” pronounced unvoiced, as Denève instructed us in his witty remarks).

The Poulenc provided Carpenter much more interpretive scope than the Saint-Saëns, in which the organ part mostly supports the rich and inventive orchestration, and Carpenter’s phrasing and coloration in the Concerto were quite eloquent. I have to admit, at no time during these works was I totally unmindful of the fact that I was hearing an electronic instrument perform a superb imitation of a pipe organ. It’s close, but it’s not the real thing. Then again, how we define “real” in music (and in every other field) constantly shifts over time. And having the organist out front and visible and the pipes — er, speakers placed ahead of the orchestra helped project the intricate solo part to the large audience inside the Tanglewood shed. Plus, as Carpenter put it in subsequent remarks, he enjoys the ability to tour with an instrument with which he can develop a close rapport, as do violinists, pianists, et al.

But after the three scheduled works on the concert — that’s when the fun started. Off went the orchestra, front and center went the organ console, and back on stage came Carpenter, this time in a tight black t-shirt. Show time! A little Gershwin, Wurlitzer-style (“Strike Up the Band”), some dazzling Bach with lightning-fast footwork (Toccata in F major, BWV 540), back to the Wurlitzer era (a lusciously throbbing and overripe “Moon River”), a bit more Bach, this time filtered through Rachmaninoff (Preludio from the Violin Partita No. 3) and, of course, wouldn’t you know, without which it would not have been complete, a Wagner transcription (Prelude to “Die Meistersinger”), everything performed with the virtuosity, originality and flamboyance I told you about above. His hands and and feet were everywhere, coaxing a new sound out of his organ every second. Now, was everything in 100% U.S. Grade A good taste? Hell, and thankfully, no.

Finally, the encore to Carpenter’s encores, the inevitable “Stars and Stripes Forever.” But Carpenter had one more trick up his sleeve, or I should say, on the toes of his sparkling organ shoes. When the time came for Sousa’s famous piccolo obbligato, the master showman played it as crisply as you’d like — on the pedals. With his feet. This feet, er feat, dominated the conversations I eavesdropped on as we headed back to our cars.

Was it all art? Of course not, at least not of the highest and noblest sort. But it was sure entertainment, something classical music has, to its detriment, mostly ceded to other musical genres. And just as prog fans remember with greatest fondness the most outrageous and over-the-top albums and concerts, I’m certain that no one at Tanglewood last Friday will ever forget the organist, his instrument, and man-0-man, them flying feets!