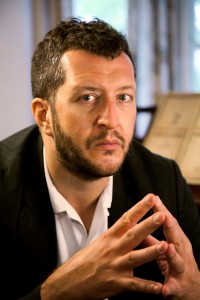 In music, as in the other arts, there is nothing more sic transit than gloria mundi.  History is replete with composers who were lionized in their day, only to have their reputations sink like a stone after their deaths.  Heard any nice Louis Spohr or Leo Sowerby lately?  I thought not.

Similar thing with musical styles.  We’ve just gone through pert near a century of being told (by a constantly shrinking cohort, I will admit) that atonality was the One True Path to the Future, and that any composer who failed to follow the Path was irrelevant.  Yes, I actually heard one of my UConn music profs, a gentle middle-aged man, say such a thing.  I won’t use his name, in part because unless you were at UConn with me, you’ve never heard of him or his music.  Turns out that the inevitable conquest of atonality was actually quite evitable.

Tricky thing, this future-predicting business.  Not that there aren’t those still willing to give it a try, the latest being Justin Davidson, one of my favorite classical critics — one of the few to out himself as a non-member of the Cult of Elli0tt Carter.  In a recent piece for the arts website Vulture, Davidson recommends two recent works as providing a “glimpse of the future of symphonic music.”

The works in question are British composer Thomas Adès‘s “Totentanz,” which you can check out in this video of its premiere performance…

…and Andrew Norman‘s “Play,” which you can hear here in a just-released recording by Gil Rose and the Boston Modern Orchestra Project:

Are they the “music of the future?”  I wouldn’t care to guess.  But the biggest reason I question Davidson’s judgment here is that, as I hear them, neither work really represents the music of the present.

This is especially true of Adès’s work, which sounds to me like a barely updated version of 20th-century German Expressionism, and early 20th-century at that.  In subject matter, harmonic language, performing style and overall mood, Adès, fine composer that he is, breaks no new ground, engages with no contemporary ideas or vernaculars, tells us nothing about being alive in the 21st century.  The ancient texts, in a language foreign to those in the concert hall, are sung by the kind of full-blown operatic voices that sound increasingly unnatural and off-putting to any listener not steeped in the classical tradition.  When contemporary classical  composition overall is moving toward a closer engagement with the here and now, how a work that shows much greater kinship with Alban Berg than with anything that anyone outside the minority classical music audience actually listens to nowadays could be a harbinger of the future is beyond me.

Next to Adès’s “Totentanz,” Andrew Norman’s very impressive “Play” sounds eminently up-to-date.  There’s a kind of action-movie, video-game ADD energy going on here that Adès lacks, as well as passages that demonstrate knowledge, if not full embrace, of minimalism, the most influential new classical style of the last generation.  Still, I would say that the gap between Norman’s muse and most of the music folks listen to ’round these parts today is pretty wide, wider than with lots of orchestral music I could think of.

Example?  Here’s a recent work composed for another outstanding Boston group, the chamber orchestra A Far Cry, by violinist-composer Kip Jones.  I wouldn’t dare compare Jones’s piece with Norman’s for complexity, nuance or scope.  But those are traditional classical music values not prioritized by almost any other music of our day.  On the other hand, Jones’s music has a beat, and contains melodies that sound like they were written in the 2010’s.

Another difference between Norman and Jones?  It strikes me that in “Play,” Andrew Norman made his bid for not just present success, but future success — a piece that would stand the test of time, like the great works of the past he clearly knows, loves and has learned from.  Whereas Kip Jones, in “Three Views of a Mountain,” wrote a piece that would fun for him and the orchestra to play and for audiences to hear in the short term, with little concern for permanence or posterity.  In my way of thinking, that makes Jones the more representative of the musical present, whereas Norman is the more concerned with the musical past and future.  I say, the past has already passed and the future can take care of itself.  Go for the present.