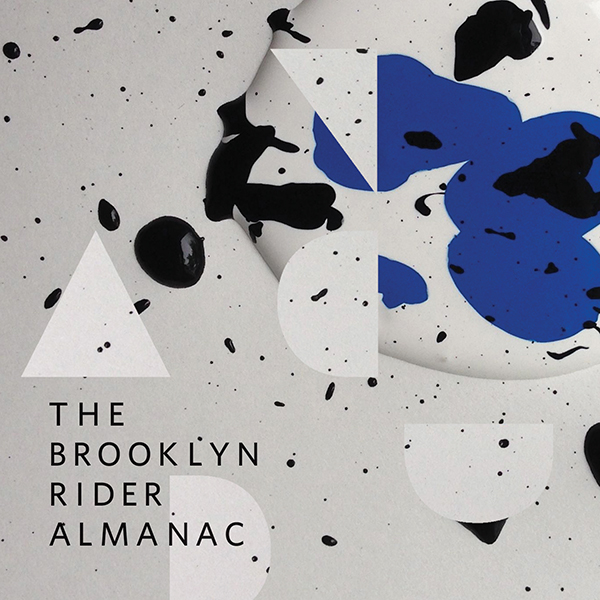 In which Brooklyn Rider, the string quartet currently at the forefront of alt-classical music (of which this new album is paradigmatic), performs three-to-nine minute works composed for them by thirteen mostly non-classical musicians, each work inspired by an artist or writer of significance to its composer.

And in which they have come up with one of the year’s best albums, to be enjoyed by anyone with an interest in music of any kind, especially the good kind.  That such a diverse collection of musicians have composed works with the imagination, strong voice and skill you hear on (almost) every track speaks very well for the level of musicianship in non-classical genres.  Then again, Brooklyn Rider wouldn’t ask just any schlub to write a piece for them.

Only two of the pieces struck me as on the naive and amateurish side, not fully up to the standard set by the others.  But I’m not going to spoil the good mood by naming names.  If you want to listen and guess which they are, be my guest.

Let me instead accentuate the positive by pointing out some faves:  Albanian cellist Rubin Kodheli‘s “Necessary Henry!,” inspired by avant-garde jazz saxophonist/composer Henry Threadgill, is five minutes of hard-driving funk and swing that almost but never quite collapses into chaos.  American multi-instrumentalist Dana Lyn‘s “Maintenance Music,” inspired by artist-activist Mierle Laderman Ukeles, develops and combines two themes, one plaintive, the other insistent, over the accompaniment of open strings, microtonal slides and percussive plucks.  It covers a lot of ground in just seven minutes, saying more than many composers do with four or more times the duration.

Australian multi-instrumentalist Padma Newsome‘s “Simpson’s Gap,” inspired by artist Albert Namatjira, is a lovely little tone poem in four related sections, each based on either or both of two indigenous-sounding melodies.  It actually could have gone on longer for my taste, though it is excerpted from a larger work called “Gaps and Gorges,” so perhaps makes more sense in context.

Inspired by the Godfather of Soul, James Brown, jazz pianist Vijay Iyer gets his groove going in the multi-sectioned “Dig the Say,” in which neither the boundaries of taste nor, fortunately, the quartet’s very fine instruments are threatened by the extensive but not excessive use of percussive effects.   Brooklyn Rider violinist Colin Jacobsen gets on my good side by adding overdubbed vocals by the great Shara Worden (who performs as My Brightest Diamond) to his wild, woolly and exciting “Exit,” setting words by the piece’s dedicatee, David Byrne.

In “Five Legged Cat,” dedicated to jazz pianist Chick Corea, Venezuelan multi-instrumentalist Gonzalo Grau contributes what is no doubt the most exciting string quartet piece ever composed in the 5/8 meter of the Venezuelan merengue.  Cool ending, too.  And in “Ping Pong Fumble Thaw,” Glenn Kotche, the drummer of the rock band Wilco, inspired by minimalist electronic musician Jens Massel (aka “Senking“) used pieces for solo drum kit as the basis of a non-stop four-movement suite with terrific rhythmic drive.

Now, after praising all the composers, let me say a word on behalf of the playing of Brooklyn Rider:  Wow.  And while I can get awfully grumpy about lo-fi recording, especially in classical music, it actually fits the aesthetic of most of the pieces pretty well.

You know what’s really refreshing for this inveterate broadcaster, presenter and lover of string quartet music?  That here we have thirteen selections by as many different composers — and there’s not a single attempt by any of the composers to place him/herself in some great string quartet lineage or to invoke some past or distant style.  Sure, there are influences to be heard  — as the veteran music critic Ecclesiastes put it, there’s nothing new under the sun — but the hereness and nowness of the music is a real treat.  As writers are told to do, these composers wrote what they know.  Could any of them go on now to write a deathless string quartet masterwork?  I couldn’t care less.

(Speaking of my being a presenter of quartets — by amazing coincidence, I just so happen to know when Brooklyn Rider will perform next in the area…)