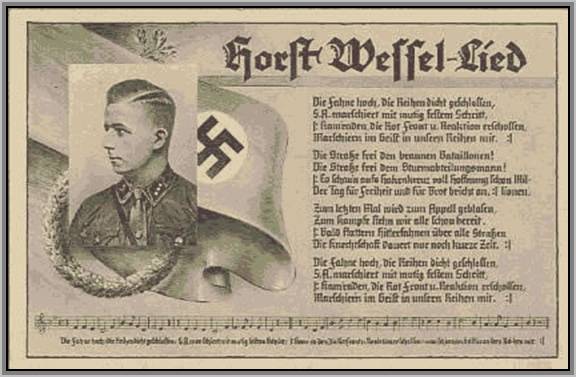 You may have missed reading about a very strange case of music’s power to stir controversy in this morning’s New York Times.  In short, a new piece by a young composer named Jonas Tarm was scheduled for a performance by the New York Youth Symphony at Carnegie Hall this Sunday.  But following its premiere last month, a Holocaust survivor in the audience recognized one melody in the piece as the Nazi anthem known as the “Horst-Wessel-Lied” (click on the link for background and to hear a rendition).  With this information, the Youth Symphony dropped the work from its Carnegie program.

A case of artistic censorship?  An appropriate and sensitive decision?  Neither is clear to me, at least until I know more and actually hear the piece, which seems an unlikely prospect.  From what I could glean from the Times article, the Horst-Wessel seems to have been quoted in historical context, much as “La Marseillaise” is quoted in Tchaikovsky’s “1812 Overture” (or in Casablanca, for that matter).  Absent more information, who knows?

But to this veteran music presenter, something was badly botched by all parties.  To quote the famous line from the film Cool Hand Luke, “What we’ve got here is a failure to communicate.”

The Symphony’s executive director, Shauna Quill, said that she was unaware of the Horst-Wessel quote before the orchestra premiered the piece.  Further, to quote the article, she “said that Mr. Tarm had declined to discuss what his piece was about, even when she called to speak with him after receiving the letter of complaint.”

I think that if I were the head of an organization that had commissioned a new work, I would want to know something about the work, and would keep asking for information until I received it.  At very least, I would want to know before it got played if it quoted any Nazi anthems, and what the heck they were doing there.  And if a Nazi anthem was quoted without the composer giving me a heads-up, I would be slightly put out by this.  Wouldn’t you?  Maybe someone could devise a checklist for those commissioning new works:  “Check where applicable:  Your new piece contains:  1. Nazi anthems, 2. Communist hymns, 3. Songs praising Kim Jong-un, 4. Something that might prove offensive to anyone anytime anywhere…”

For his part, Mr. Tarm is playing the free-speech martyr, at least as far as his website and the Times article go.  Now, perhaps he had a perfectly legitimate reason to quote the Horst-Wessel, a reason which could and should have been detailed in program notes.  After all, the song is not exactly a household melody ’round these parts.  In fact, I couldn’t have hummed it before hearing it on the above link, and I can hum a whole lot of tunes.  In which case — what impact did Mr. Tarm expect the quote to have if hardly anyone would recognize it?  Actually, he did provide a program note, consisting of the piece’s title, a dedication, the date of completion, and five lines from T.S. Eliot.  Hey, I dislike verbose program notes as much or more than the next audience member.  But in this case, these notes don’t cut it.

My recommendation:  Mr. Tarm should be more forthcoming about his piece’s intent, and maybe learn a lesson along the way.  And then, the Youth Symphony should play the piece on some forthcoming program, with annotation.  Can we all agree on that?

P.S.  The Times article made me recall the times I broadcast Joseph Haydn’s “Emperor” Quartet, only to receive calls complaining that I was playing “Deutschland über alles.”  Well…I was, sort of, as you can hear here.  And I could explain the historical context of the melody until I was blue in the face (such as that the tune is still the German anthem!).  To no avail; the offence was already felt, and no explanation would make it go away.  So, I eventually stopped playing the piece on the radio.  A case of artistic censorship?  An appropriate and sensitive decision?  An avoidance of unnecessary grief?  You tell me.

One thought on “A failure of classical communication”