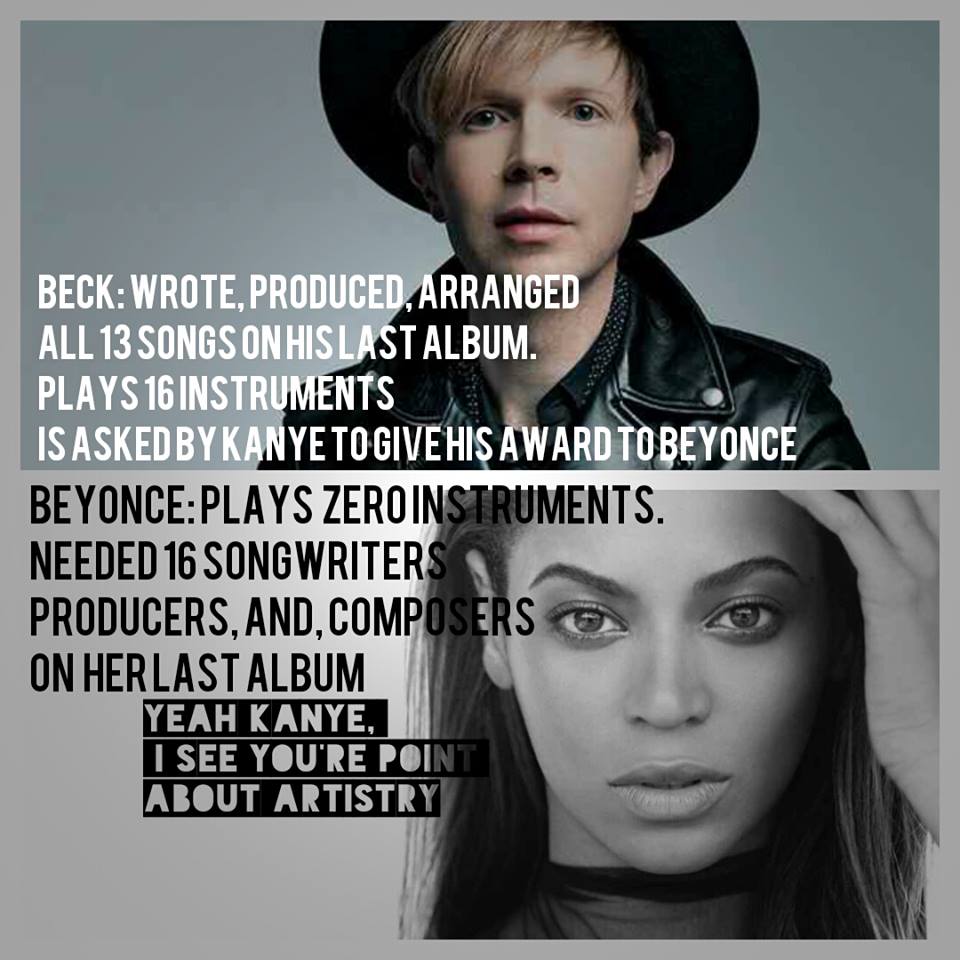 If you haven’t heard, rap music star Kanye West made a minor ass of himself at last Sunday’s Grammy presentation.  You can get the gist of what he did and said here.  In very short, Mr. West — may I call him “Kanye?” — was disappointed that the Album of the Year Grammy went to Beck for his “Morning Phase” rather than to Beyoncé for her self-titled album.  Here are Kanye’s post-presentation comments:

The Grammys, if they want real artists to keep coming back, they need to stop playing with us. We ain’t gonna play with them no more. ‘Flawless,’ Beyoncé video. Beck needs to respect artistry and he should have given his award to Beyoncé, and at this point, we tired of it. Because what happens is, when you keep on diminishing art and not respecting the craft and smacking people in their face after they deliver monumental feats of music, you’re disrespectful to inspiration.

I’m not going to get into the spat over Kanye’s “dis” of Beck, or weigh in on which album is better — mostly because I haven’t yet spent serious time with “Beyoncé,” though even a cursory run-through reveals it to be an album of scope and ambition, one that touches on many styles and timely concerns.  (I have listened to “Morning Phase” several times, and think that it’s excellent, for what that’s worth.)

But I’m intrigued by one line of debate that has ensued, one summarized by the viral photo at the top of this blog entry.  Beck’s album, you see, was a mostly do-it-yourself (DIY) affair, whereas Beyoncé’s involved several producers, songwriters and other participants.  Does that necessarily make Beck’s album the superior work of art, as the text of the photo implies?  And is an artist who does more than just sing more worthy of admiration than a “mere” vocalist?

Welcome to one of the mini-culture wars of pop music (classical is a whole separate issue), one to which you may not have given much thought, but which has simmered for decades.  On one side are those who claim that pop has gone downhill since the songs have no longer been written by professional craftsman and sung by well-trained singers.  On the other side are those who regard the singer-songwriter (possibly also instrumentalist and producer) as a finer, more complete artist than one who can only do one thing.

These hostilities commenced around 1964, with the advent of the Beatles and Bob Dylan.  Though it’s now the norm, for a big-time pop group to write its own songs and play its own instruments, we should recall,  was a novelty before the Fab Four.  As for Dylan, we have him to thank (or blame) for the proliferation of singer-songwriters that have produced some of the most glorious, and most banal, music of the last generation.

In this culture war’s present state, the battle lines cut many ways.  There’s 0ld school vs. new school.  There’s divas and divos vs. hipsters.  There are certain genres, e.g., country and r & b, vs. other genres, e.g., the various indies- and alts-.  There may to an extent be black vs.white, though I’m not certain how much of an extent that is.

So where do I stand — or do I even take a stand?  Based much more on my own listening preferences than any attempt at Solomonic wisdom, I find that there’s something to be said for both approaches, depending on the style of the music as well as the priorities of the listener.

If, for instance, you want to hear American popular music at its artistic apogee, I direct you to interpretations of the “Great American Songbook” (the Gershwins, Cole Porter, Rodgers & Hart, et al.) by such immortal vocalists as Frank Sinatra, Ella Fitzgerald, Tony Bennett, Billie Holiday, Mel Tormé, Mabel Mercer — the melody goes on an on.  In other words, songwriters who didn’t sing writing songs for singers who didn’t write songs.  With few exceptions, nothing in the last generation of American pop can match these peerless artists for sheer mastery of singing or songwriting.

Yes, some beautiful songs still come out of pop bands and singer-songwriters, but after listening very extensively for years, I can name few in these categories who match the great composers and lyricists named above for professional craft.  Oh, the proliferation of half-formed ideas, lazy construction, bum rhymes and careless text setting!  That’s why when I come across contemporary songwriters who take their craft seriously, I am unstinting in praise.

As to the singers, those who can get by as “mere” vocalists nowadays are those whose talent and polish approximate their great predecessors, such as Michael Bublé and, in fact, Beyoncé.  How many lead singers or singer-songwriters share their vocal gifts or technical polish?  They remain very fine, even essential artists, even if their art is of the re-creative sort.  Would you disparage such fine actors as Meryl Streep or the late Philip Seymour Hoffman because they didn’t write their own scripts or direct their own films?  Maybe if  you’re a French film critic you would, but then, you would worship Jerry Lewis for doing it all himself — case closed.  As for the rest of our current vocalists — you know, a singing lesson or two wouldn’t hurt.

On the other hand, nothing gives me more satisfaction now than the artists who create their own songs, their own albums, their own musical worlds.  You’ll see their albums praised in this space, right up to one I gushed over earlier this week — and have listened to in continued amazement several times since.  These are the musical artists I would put up against any in their generation, in any genre, very much including classical.

Getting back to the viral photo at the top, let’s do a thought experiment.  Suppose instead of Beyoncé, the artist pictured on the bottom was another very talented African-American female, Rhiannon Giddens.  Ms. Giddens, best-known as lead singer of the old-timey Carolina Chocolate Drops, has just released her debut solo album, “Tomorrow is My Turn.”  From her website: “The album, produced by T Bone Burnett, features a broad range of songs from genres as diverse as gospel, jazz, blues, and country, including works made famous by Dolly Parton, Patsy Cline, Odetta, and Nina Simone.”

So, no originals, just covers.  Would Ms. Giddens earn the sneering disapproval aimed at Beyoncé?  Considering that the former’s album was issued by Nonesuch, the NPR of record labels, produced by T Bone Burnett, a certified very cool person, consists of songs by much honored musical and feminist icons, and that Ms. Giddens’s image is more serious artist with retro-hip cred than megawatt diva, I doubt it very much.  No, something else is in play here, something that has as much or more to do with the type of person who would listen to Rhiannon Giddens, or to Beck, as opposed to the kind of person who would listen to Beyoncé.  Now there’s a culture war I wish would go away.

Now that I’ve mentioned it, check out “Tomorrow is My Turn.”

One thought on “Beck, Beyoncé, and the battle for the soul of contemporary pop”