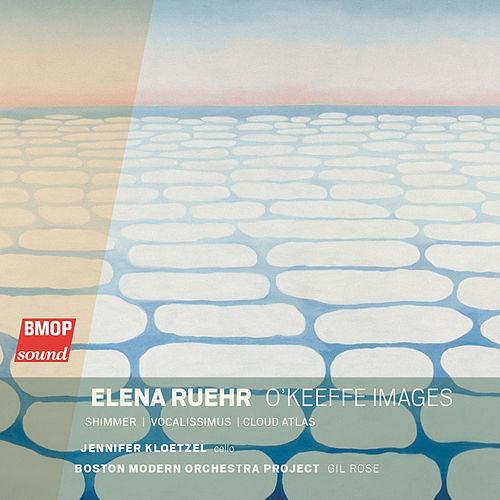 Elena Ruehr‘s music has it all going — life, line, color, pulse, depth, shade, shape.  It’s inviting and welcoming, then once you’re inside, stimulates and entertains (what a concept!) to the last note, at which point, like a child after an amusement park ride, you want to go right back and do it again.  She was one of my favorite “go to” living composers for my public radio classical show, and hers is some of the music from my radio days that I’ll continue to track down and enjoy — something that, to say the least, is not true of everything I played on the radio.

A graduate of the University of Michigan and Juilliard, a faculty member at MIT since 1991, recipient of prominent fellowships, “Dr. Ruehr” (as she’s referred to in her biography) may be an academic, but certainly does not compose like one, or at least like the composers who give the word “academic” its musty odor.  Heck, some of my best friends are composing academics who write really good stuff; kudos to them and to her for helping to move classical composition in a positive direction.

The four works on this fabulous new album by the invaluable Gil Rose and the Boston Modern Orchestra Project cover the years 1991 to 2013, yet remain fairly consistent in voice and quality.  Of the virtues I gushed over in this blog entry’s first sentence, the first to grab me in her music is its pulse, and the way a constant underlying pulse becomes the foundation for delightfully complex interplay and counterpoint of small, easily graspable rhythmic ideas.

You hear this right at the start of “Shimmer” (1995), a work for string orchestra that according to Ruehr, and easily confirmed by listening, has precedent in the music of Antonio Vivaldi.  Exhilarating and inventive, “Shimmer” was previously recorded by Scott Yoo and the Metamorphosen Chamber Orchestra, the no-longer-extant group for whom it was composed.  It may be a case of first love, but I’ll admit to enjoying the leaner, more rhythmically incisive original recording (Spotify link here) more than the smoother, more opulent BMOP version.  Your results, however, may vary, the work stands up to multiple approaches, and here and throughout, Maestro Rose and BMOP outdo themselves in their preparation and execution of extremely demanding music.  If you haven’t gotten into their amazing and fast-growing discography yet, you’re missing an awful lot of great music.

In moving to track 2, we move back to 1991, and the earliest work on the album, “Vocalissimus.”  As in “Shimmer,” a steady pulse bubbles throughout, but this time, one’s attention is drawn to the melodic ideas that emerge, develop and coalesce, singly or simultaneously, and which propel the piece forward to a (spoiler alert!) subtle, far-from-obvious conclusion.  Much of the fun comes from the interplay of the instruments of the full orchestra, both solo and in sections, another reminder of what a glorious creation the orchestra is.

Next on the album, “Cloud Atlas” takes its name from David Mitchell’s fantasy novel, one of whose characters, a goddess of the post-apocalyptic future, is given voice by a solo cello, much as the biblical King Solomon was in Ernest Bloch’s “Schelomo.”   With its rhapsodic and ruminative cello melodies, frequent use of odd meters, and liberal sprinklings of harp, the piece gives off a mild and sweet but somewhat generic Asiatic fragrance.  Pleasant as it is, a little more eventfulness and virtuosity might have made “Cloud Atlas” into something more.  Then again, if you had as rich and sleek a cello tone as that of Jennifer Kloetzel (for whom “Cloud Atlas” was composed), you’d also want little to get in the way of showing it off.

With the 33-minute long “O’Keeffe Images,” we get into Major Orchestral Work territory, one which decreasingly and depressingly few composers have access to in current times.  The work’s eponym would of course be American artist Georgia O’Keeffe, three of whose starkest paintings were set to music by Elena Ruehr at separate times over the years 1993-2013.  Of course, just how one can “set” a painting to music, and how much attention one should play to the visual image when listening to the music, remain open questions.  I’ve linked on-line reproductions of the O’Keeffe paintings to the movements’ titles below; as always, I suggest listening at least once before seeing the artwork, reading the program notes, etc.

First in the triptych but most recent in composition, “Summer Days” is no day at the beach; rather, it’s a non-stop ride through hot, dry, dangerous country — and if that image strikes you as cinematic, well, so will the music, in a good way.  Taut and thrilling, it would likely have become a hit back in the days when thrilling new orchestral works actually became hits.

The first of the “O’Keeffe Images” in order of composition, “Sky Above Clouds” exhibits many of the same qualities and employs many of the same processes as “Summer Days” — too much of the same, unfortunately, to provide sufficient contrast.  Somewhat brighter and wider-ranging in color and more complex in its interplay of line and rhythm, “Sky” may actually be a more interesting piece than “Summer Days,” if less immediately graspable than its predecessor in the triptych.

For the wild and exuberant finale of the set, “Ladder to the Moon” (2003) brings on the hand percussion, brings out the polyrhythms and melodic intervals of the East — echoes of earlier Eastern-inspired composers like Colin McPhee and Lou Harrison abound — and engages mind and body to its whirlwind conclusion.  At which point, like the kid on the amusement park ride, you’ll want to go back to the beginning and hear the whole album again.  Here you go: