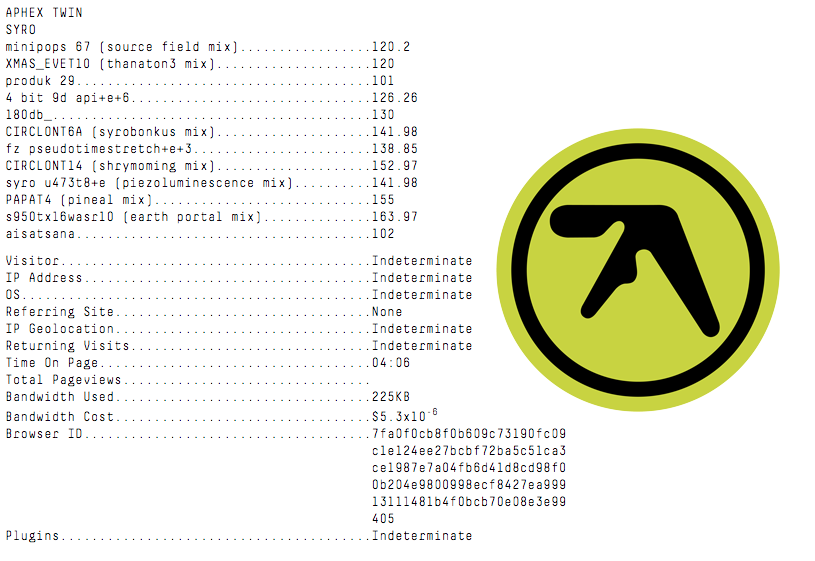 Look who’s got a new album out — the man who taught electronica how to energize the mind as much as the limbs.  Call it “Braindance” (a term he coined), IDM (“Intelligent Dance Music”) or whatever, the music of Aphex Twin long since escaped the boundaries of genre to take a prominent place in the wide, wonderful world of vital, relevant and, make no mistake about it, great music.

It’s been thirteen years between Aphex Twin full-lengths, making the release of “Syro” a cause for much rejoicing throughout the land.  So, what has this restless genius, one who exhausts the thesaurus for synonyms for “protean,” “chameleon” and the like, got for us after all this time?

Turns out to be neither reinvention nor regurgitation; instead, it’s a confident, mature artist putting his flag in the ground and reclaiming his kingdom, much as [PRETENTIOUS COMPARISON ALERT] the great tenor saxophonist Coleman Hawkins, returning home after several years in Europe, did with his celebrated “Body and Soul.”  The Boss is back!

Back that is, with 65 mind-blowing, booty-shaking (did I just write that?) minutes of musical entertainment, good as he ever was.  There isn’t a thoughtless or uncared-for bleep in any of the dozen tracks; indeed, each of the approximately 200 (I stopped counting) electronic tools listed on the insert are all put to good use.  When you listen, for instance, to the funky riff that courses through track two, “XMAS_EVET10 (thanaton3 mix),” take note how many variations of line and tone are built in — and how much of a difference it makes.  The final track, “aisatsana,” makes for a surprising and touching epilogue, too.  Said it before, say it again:  This kind of artistry matters, and should be recognized and celebrated.

So, who’s been at play while Aphex Twin has been away?  Oh, just such brilliant, ceaselessly creative electronica artists as (among many others) Burial, Matmos, Oneohtrix Point Never, Toro y Moi and, far from least, Flying Lotus, the artist behind a non-stop bullet train of an album called “You’re Dead!”

The music blends electronic sounds, samples, live instruments, singers, rappers and choirs into a cinema-of-the-mind narrative that, while never directly spelled out, seems to parallel the psychedelically violent guro manga (I had to look it up too) illustrations by Shintaro Kago that go along with each of the nineteen tracks.  Such notables in their fields as Herbie Hancock, Thundercat, Kendrick Lamar, Snoop Dogg, Jeff Lynne, Niki Randa and others whose names you may or may not recognize stop by for a track or two.  And as with the Apex Twin, the level of care taken with every element of the album is extraordinary — the tension doesn’t flag for a second.

So even, make that especially, if you’re new with this whole electronica thing, as I was until far too recently, take the time to find out what creative and very cool sounds have been happening while you were occupied elsewhere.  It’s what keeps us aging music lovers alert and alive, fully engaged with not just our beloved past but with the hopeful present.