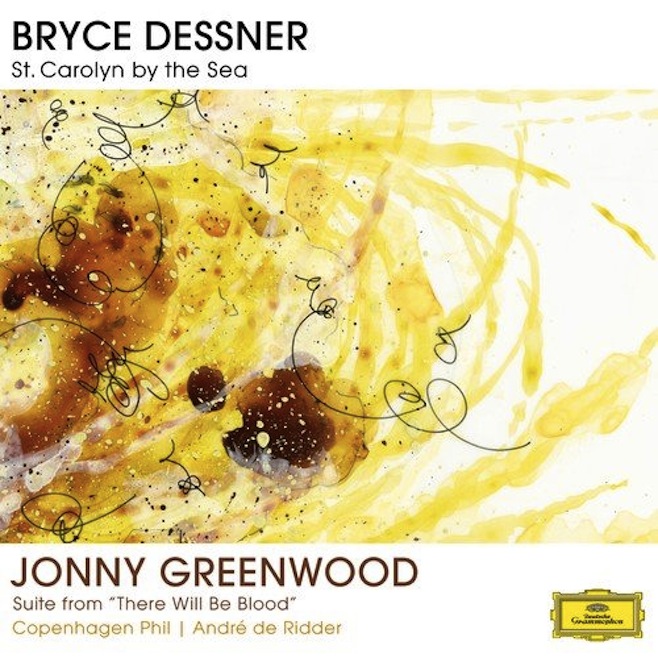 Like Arcade Fire’s Richard Reed Parry, whose “Music for Heart and Breath” was the most recent album reviewed in this space, the composers featured on today’s album also both play in very respected rock bands:  Bryce Dessner in The National, and Jonny Greenwood in Radiohead.  After hearing the two albums, can one make generalizations about what classical works by rock musicians can be expected to sound like?  No, but there are some similarities between and among the three composers, as well as telling differences.

Of the three, 38-year Dessner is the only one with academic training in composition (Yale).  He also has the deepest experience in classical music, having previously collaborated with such new music stalwarts as the Kronos Quartet (who have recorded his music) and Bang on a Can.  And though not totally pertinent to today’s review, allow me to suggest that you check out the  very cool music of Clogs, the unclassifiable part-indie, part-jazz, part-classical group that Dessner co-founded in New Haven in the mid-nineties.

In short, Dessner is neither a classical newbie nor just another rock musician aiming over his head (like the subject of this review).  And it shows in the three pieces on today’s album.  Solidly constructed, assured if not extremely imaginative in scoring, they’re more-than-representative 21st-century classical works that would not be out of place on your local symphony or chamber orchestra’s next program.

Of course, the local orchestra would most likely program just one of Dessner’s works per concert, rather than play three in a row, the way they come at you on the album.  And having taken in all three in one sitting on several occasions, I can safely opine that a one-at-a-time strategy would better enhance Dessner’s compositional reputation.

For while the names of the pieces and their putative inspiration are different, the basic game plan of all three is the same.  They begin in a quiet, misterioso mood, with isolated, out-of-time solos over a hushed, suspenseful background — think Alexander Courage’s music for the beginning of Star Trek (“Space…the final frontier…”).  Eventually, the mists part, the isolated gestures coalesce, the tempo picks up, and the piece gets its groove on.  That groove falls somewhere between a Baroque-style ground bass (i.e., a repeated bass line and harmonic pattern overlaid with melodic variations) and Steve Reich-ian minimalism, driven by a moto perpetuo rhythm.  What happens after that is unique in all three cases, though in general, Dessner’s endings strike me as inconclusive and not fully convincing.

But hear the first piece, “St. Carolyn by the Sea” (named for a passage in Kerouac), on its own, and you can savor the unusual combination of full orchestra with two guitars (playing some blatantly Arvo Pärt-like figures, it must be said), as well as the remarkable rhythmic complexity of its main section.  Stick with just the second, the all-string “Lachrimae” (title taken from a piece by John Dowland), and you can enjoy picking out Dessner’s admitted inspirations in the string writing of Dowland, Benjamin Britten and Béla Bartók — not a bad trifecta.  Start with the third and oldest piece, “Raphael” (composed while experimenting with an out-of-tune harmonium), and you can have fun tracing the diverse drone (sustained note) effects throughout, as well as some very resonant scoring for orchestra and electric guitar.  This one is my favorite of the three.  Are you listening, local conductors and guitarists?

When we get to the oldest of our three classical rockers, 42-year old Jonny Greenwood, we hear a style that, unlike that of the other two, shows little influence of minimalism or other stylistic trappings of the “alt-classical” scene into which Parry’s and Dessner’s works fit fairly comfortably.  Rather, Greenwood’s interest in classical music started with his discovery of the music of Krzysztof Penderecki, the Polish avant-gardist-turned-neo romantic with whose music Greenwood shared an earlier recording I praised in one of my old NEPR blogs.

Other than some multiple string glissandi (sliding from note to note) and a few tone clusters, there’s little of the avant-garde in the Suite from Greenwood’s music for “There Will Be Blood,” one of six films Greenwood has scored.  Rather, these musical vignettes are mostly filled with the kind of lush, haunting romance one would associate with the likes Samuel Barber.  OK, one section is more rhythmic, featuring col legno (played with the wood of the bow) cellos and basses, but I wouldn’t call it rocking.  The scoring is for strings only, except for an oddly brief oboe part in the first movement — a part that, considering tight budgets, might prevent otherwise willing orchestras from taking the the piece up.  That would be too bad, for the Suite is very lovely music, even if (or partly because) it’s not terribly consequential.