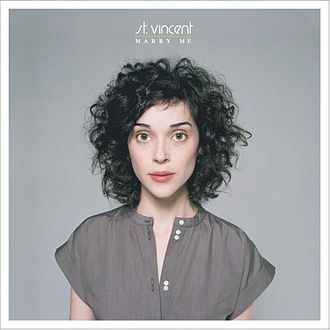 “Marry Me,” Annie Clark’s first album under her nom de musique, St. Vincent, came out at the same time I came out — out, that is, of my decades-long, self-imposed disdainful ignorance of popular music.  Not to make this all about me, but the two events are not entirely coincidental.  Equal parts ingenuousness and genius, and clearly the work of a very gifted and accomplished young musician, “Marry Me” was among the albums that convinced this old classical and jazz fundamentalist that there was gold to be found among the dross (sometimes entertaining dross, to be sure) of pop, if only I would open my ears to it.

Now, seven years and three albums later, St. Vincent has just released “St. Vincent.”  Make what you will of the self-titling, and the perhaps intentional symmetry of the winsome pose on the cover of her debut on the one hand, and on the other hand, the ice-queen-on-her-throne glower on her latest.  But if you’d been listening all along, you might have seen and heard it coming.  Of the airiness, lyricism and rainbow palette of “Marry Me,” there has been progressively less on each album.  Of darker colors, grittier textures and deeper themes (along with their concomitant critical approval), just the opposite.  Each album has made for extremely compelling listening, but what they have compelled has been shifting from ecstatic discovery and hedonistic pleasure to more sober admiration.  Mind you, we’re not talking Moses und Aron here, and her second-most-recent, “Strange Mercy,” has grown on me over the years.  Still, I long for the days when I could sit in front of my speakers and gape with wide-eyed wonder at St. Vincent’s music.

So, what does Annie Clark/St. Vincent have for us this time?  Eleven songs, forty minutes, lots to consider and discuss, and for this listener, the least pleasure to be had from any item in her discography.  The music sounds closed in on itself, restricted, monochrome, and a rather tarnished and rusty monochrome at that.  The songwriting, though still better than most others’, is by St. Vincent’s standards attenuated, repetitive and lacking in melodic freshness.  Clark’s still got one of the richest and most attractive voices in pop, and can play some pretty mean guitar — if only those virtues could be shown to greater effect.  And while I’m much more a music than a words guy, even I couldn’t help raising an eyebrow at the obscurity and “big theme” pretense of the lyrics, such as the h0-hum critique of the ubiquity of social media on “Digital Witness.” “What’s the point of even sleeping,” she asks, “if I can’t show it and if you can’t see me?”  Well, if she feels so strongly about it, she can shut her Twitter account down.  She won’t, though, as she explained (if you can make head or tail of her explanation) in a recent article in The Guardian.

Of course, we have no right to demand that our artists stay still, and shame upon the artists who do.  What important artists do matters, whether you like it or not.  And for certain, Annie Clark is one of the most important artists in contemporary American music.  Admittedly, mine might be the minority view; Pitchfork, for instance, called the album’s final track, “Severed Crossed Fingers” “the best closing song on a St. Vincent album yet.”  Well, get thee to Spotify, or to your favorite CD store, and compare this song to “What Me Worry,” the final track of “Marry Me, ” a sinuous, harmonically sophisticated ballad in which Annie Clark channels her inner Billie Holiday.  Which one makes your heart soar higher?